AA LaNyalla Mattalitti, Chairman of the House of Regional Representatives of the Republic of Indonesia, also known as the Senate House, officially nominated the Visions of Peace Initiative for the Nobel Peace Prize.

“I fully support the Visions of Peace Initiative (VOPI) to win the Nobel Peace Prize. To date, VOP has held more than 50 events throughout Indonesia and has inspired hundreds of thousands of young people.

VOPI events have been held throughout the Republic including areas that have experienced conflicts and natural disasters. Hopefully through the engagement of youth using art and other creative forms of expression the VOPI can continue to inspire the younger generations. With the positive results that the VOPI has achieved to date, I believe the VOPI is very deserving of the Nobel Peace Prize.” 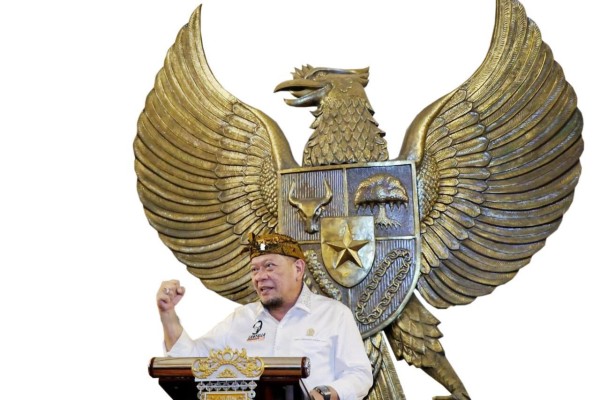 According to the founders of the Visions of Peace Initiative, Prince KPH Dr. Damien Dematra and Princess Cheryl Halpern, the recognition and nomination of the Visions of Peace Initiative from the Indonesian Senate House is unprecedented and incomparable honor. This extraordinary acknowledgment of a non-governmental organization has never happened before in the history of the Republic of Indonesia. This most meaningful tribute will inspire everyone who has already participated in the VOPI and those who are yet to participate, to continue to promote peace and tolerance.

Princess Halpern explained the perspective upon which she and Prince KPH Dr. Dematra founded the VOPI saying, “The Visions of Peace Initiative embraces the Ethic of Reciprocity, also known as the Golden Rule, a universal value that is included within all faiths and traditions. This Ethic of Reciprocity teaches us to, ‘Do Unto Others As You Would Want Done For Yourself and Do Not Do Unto Others As You Would Not Want Done To Yourself’. It is a message that finds expression through the millennia in the teachings of all faiths. It is also a concept that is central to Indonesia’s motto, ‘Bhinneka Tunggal Ika, Unity With Respect For Diversity’ since without respect for diversity within a family or community there can be no unity. However, this essential pillar of civil behavior is not effectively taught to the youth of today.

The Visions of Peace Initiative is committed to imparting a meaningful understanding of ethical behavior that can be achieved through an appreciation for the value of reciprocity. Every participant in the Visions of Peace Initiative becomes an advocate for tolerance as they bring their vision and understanding of the Golden Rule to their homes and community. They have learned that there is a nobler and more fulfilling alternative to intolerance and violence. By embracing the Golden Rule they are displaying behavior that promotes civility, dignity and respect.” 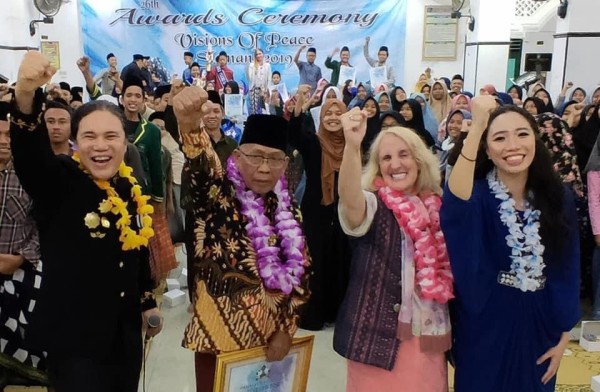 Prince KPH Dr. Dematra expanded on his co-founder’s comments saying that, “the mission of the VOPI is to inspire young Indonesians under the age of 18 to express their views about tolerance and peaceful coexistence through the broad spectrum of the arts: including drawing, poetry, song, dance and film. These arts modalities provide multifaceted platforms through which to bridge socio-economic, ethnic and religious divides. By using their artistic talents the participants channel their ideas and share their perspectives on tolerance, peace and respect for each other. The VOPI provides an important opportunity towards nurturing attitudes of respectful communication and acceptance.

Since its inception in 2017, the VOPI has been working together with schools, orphanages and religious organizations throughout Indonesia.

As of the start of 2022 the VOPI has already held 52 events in different Indonesian cities. In response to the Covid-19 pandemic the Visions of Peace Initiative went viral in order to continue to engage with young people throughout the Republic. To date, I am proud that the VOPI has touched and inspired hundreds of thousands of young Indonesians.”

Youth today live in a time when much of the world is suffering from violence, hatred, intolerance, bigotry and abuse. These themes are present in most of the stories that are broadcast and shared on the global multi-media and social networking platforms that they access. As a result, all youth need to be taught, with and by example, that when individuals are persecuted because of their gender, race, religion or physical limitations, that they have a duty to protest and fight injustice before they too lose their human dignity.

With this is mind the Visions of Peace Initiative is honored to have also been nominated for the Nobel Peace Prize by Prof. Dr. Ir. Oktovian Berty Alexander Sompie, Rector of the Universitas Kristen Indonesia Tomohon and by Dr. Ephraim Isaac, Director of the Institute of Semitic Studies at Princeton University. Both of these respected academicians have prioritized the importance of the VOPI’s teaching the young about civility.

Princess Cheryl Halpern and Prince KPH Dr. Dematra urge us all to appreciate Alfred Nobel’s comment that, “Good wishes will not ensure peace.” We must remember that civility and peace require a steadfast commitment to instill in every generation an understanding of the “Ethic of Reciprocity.